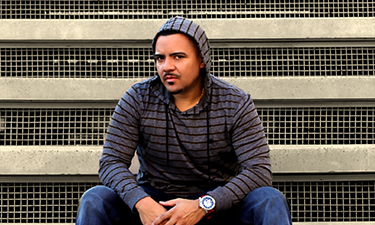 All great music reaches into your very soul, captures the mind and touches the heart. It can tell a story, take you on an incredible journey, and target many different types of emotions. Music such as this can only come from the hard work of a great artist, an artist such as George Acosta. With over 20 years of experience as a DJ and producer, George can certainly be considered a driving force in the dance music industry. He is one of the few original EDM artists that has managed to keep up with the evolution of dance music, reinventing himself and coming on stronger each and every time.

Born in Cuba and raised in Miami, George Acosta showed an interest in music at a very young age while watching his father play records at home and at parties — music was definitely a staple in the Acosta household. George began his career as a local DJ in his native city Miami, spinning everywhere from high school parties to clubs on South Beach. He would spin any type of dance music, from techno to house. As his popularity on South Beach grew in the early 90s and house DJs such as Erik Morillo and Roger Sanchez were becoming rising stars, George began gaining an interest in producing dance music.

“Honestly, it was when I first heard Josh Wink that I made my decision to produce my own music,” says Acosta.

A trip to Germany is where George’s creativity flourished and Planet Soul was born. Signed under Strictly Rhythm, Planet Soul gained its stardom for the well-known hit “Set You Free,” earning Acosta the Gold Record status. Gaining international status with the success of Planet Soul didn’t stop George from forging ahead. Once again, he returned to his roots and began DJing as the well-known George Acosta, transitioning from house to trance music. He then began his residency at the very famous Shadow Lounge on South Beach, solidifying trance not only in Miami but also in the U.S. Week after week, George mastered his craft as a trance DJ. Many of his fans say that George Acosta has an innate ability to read the crowd and know what they wanted to hear. He was also notorious for having the ability to take his audience on a wonderful, emotional roller coaster ride during their visit to the club.

While at Shadow, George continued producing some of his own original work. Some of these songs were “Emotions,” “Taking Over Space,” and “The Reaper.” He also released several compilations under Ultra Records, including ‘Awake’ and ‘AM & PM.’ Between touring around the world at popular events such as Berlin’s Love Parade, Ultra Music Festival and world-renowned clubs such as Space Miami, Exit, Privilege, and Pacha, he continued releasing more hit compilations such as ‘Trance Nation America’ on Ministry Of Sound and ‘The History of Trance.’ This is what made George Acosta a legacy in dance music.

The beginning of the new millennium proved to be a time of change for George. Dance music was slowly making a shift in a new direction; it was now becoming mainstream and as new artists and producers began to emerge, dance music was being created to fit a more commercial sound and attracting a new generation of listeners, leaving the popularity of the underground trance scene in the past. Therefore, in 2001, after three years of much success, Shadow Lounge closed its doors giving Acosta the chance to expand his horizons, take on new challenges and projects, and make his transition from trance artist to the now phenomenal DJ, producer, and remixer he is known for today.

Acosta wanted to produce and play music that would have a well-balanced, universal sound that all music lovers could enjoy while still keeping his renowned signature style. He was able to find that in the fast-rising, popular genre of music known as progressive house. George Acosta says, “I guess what makes me special is that I never stay behind the times. I’m constantly evolving, trying to better myself and challenge myself.”

With that being said, George began a new venture, syndicating his own radio show titled The Lost World on the popular Miami FM radio station, Party 93.1. After gaining much popularity and success thanks to the show’s loyal listeners, The Lost World moved to its new and current home on Sirius XM Satellite Radio’s Electric Area. The show’s concept is to showcase not only other artists’ music but to also showcase George’s original productions. Throughout the show, Acosta’s host, Double H, identified each song with its title and artist, as well as announced all George Acosta news and tour dates. The radio show provided another source for George to reach out to his old fans and gain some new ones. In between mixing shows for The Lost World, Acosta continued to tour around the world spinning at popular clubs and hotspots.

It was during this time that Acosta was made an Ambassador for the HIV and AIDS charity organization Dance 4 Life. It was truly an honor for him to represent this organization along with other great DJs and producers such as Tiesto. Acosta’s list of accomplishments didn’t end there: in 2007, George Acosta won DJ Times’ America’s Best DJ. This award was very meaningful because it was awarded to him through the votes of his fans. That same year, George Acosta enrolled in the SAE Institute to further expand his self-taught knowledge in the area of music production. To this day, George believes this decision helped to sharpen his skills and enhance his career as a producer. His perseverance and hard work prevailed and in 2009, he earned a degree in sound engineering and audio technology. This made George Acosta an even greater unstoppable force in his line of work.

While attending SAE, George was signed to Black Hole Recordings and released his first digital download compilation titled ‘From Miami to Amsterdam.’ During this time, he was also introduced to the very talented vocalist Fisher. With her, George produced songs like “True Love,” “Beautiful,” and “Tearing Me Apart.” Due to overwhelming response, Acosta along with studio partner Gerry Cueto decided to produce his second studio album ‘Visions Behind Expressions’ under Black Hole Recordings. According to Acosta, “’Visions Behind Expressions’ is more of a vocal story. For those who know me on a personal level, I am a man of few words; through the music, I am able to express all my thoughts and emotions. It is my drive and passion for music that has given me my latest album.”

Searching to expand his career in the music industry even further in 2009, George and his long-time manager Francisco Pacheco decided to create the label AcoMusic. The decision to create his own label transpired from the desire to brand his personal, unique signature sound and style. In an effort to evolve into something greater, Acosta wanted to use his label not only to release his own original music but to also remix songs from other artists. In addition, George wanted the freedom to develop new artists from around the globe that had the ability to produce and complement his quality signature music. Some AcoMusic releases by Acosta include “I Know” featuring Tiff Lacy and “Nite Time” featuring Kate Walsh. Along with the success of his new album and record label, George is currently the Resident DJ at Las Vegas’ Encore Beach and Surrender Night Club inside the Wynn Hotel. He is also the Resident DJ at Club Glow in Washington, D.C. and has joined the Day Glow Tour. In addition, George has just become the newest resident DJ for the RX Pool Parties at the Gansevoort Hotel in Miami Beach. There seems to be no end in sight for George Acosta or AcoMusic.

Passion combined with skill is what fuels George Acosta. In an interview, George once said, “I have been fortunate to have much success in my career, and my challenges have only made me stronger. Personally, as an artist, there is always room for growth. I love to learn and I never plan on losing the drive to master my craft. I feel like I am destined for more and even greater things. The best is yet to come.” It is this dedication, in addition to his love for music and his willingness to evolve, that will continue to augment George Acosta’s career and success.