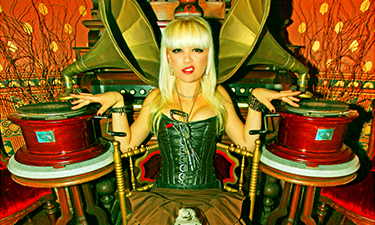 DJ, producer and vocalist Lea Luna has been in the game since the vinyl days, blending her underground beats with her higher ground vocal tastes, making her a solid choice for any gig from rave to radio. Across the US and abroad for over a decade, Lea has graced the stages of some of the most recognized clubs in the world as both a DJ and a singer, including Marquee Las Vegas, Avalon Hollywood, Beta Denver, Exchange LA, XIV, and many more. With several Beatport chart-topping vocal records under her belt in multiple genres, Lea pushes into the newest trends in dance music with her own flavor. She is a walking encyclopedia of dance music history, familiar with many subcultures and trends within those across many decades, and has even contributed to the media as an influencer having published pieces with DJ Mag, Vibe Magazine, EDM.com, and other music blogs and publications for years. She’s been featured in radio, TV, and print commercials for major scene companies including Beatport, V-Moda headphones, Tascam, Vlado Footwear, Omnia Nightclub, Beta Nightclub, Skylab, and Clear Channel, to name a few.

Lea Luna is featured regularly on internet television and radio shows across the globe and has many times been asked to be a show guest and ended up becoming the host. Her sets are rooted in underground house music and peppered with recognizable vocals to keep it relevant yet classy to the club world. Her original releases and vocal collaborations have spanned all across the board within the electronic music sphere from progressive hits on Black Hole Recordings to full-on bass bangers on Dim Mak and Play Me Records to Ibiza jams on Moody Recordings and more. Her collabs include EC Twins, Sydney Blu, Joman, Mike Balance, Manufactured Superstars, Mike Hiratzka, and others. Her work has been remixed by a large span of styles by artists such as Bare, Sander Kleinenberg, Pleasurekraft, Exodus, Trent Cantrelle, Helicopter Showdown, Havocndeed, and over 100 others. A powerhouse in the studio, on the decks, on the mic, and in the media, Lea is holding down her all-star status in 2017 and beyond with fresh releases, mixes, appearances, and projects well on the way.